Every house has a story

Every home has a story and that is certainly true of all VBC houses.

We’ve built more than 270 houses and the combination of different family elements and different volunteer groups means each has a different tale.

But one thing they all have in common is the sense of connection created between the families, volunteers and our team – and that was certainly the case for Irish couple Orla and Fergal.

They helped build house #265 and everything about this build was special – it brought together the threads of many lives to weave a heartfelt tapestry that will leave a lasting impression on all involved.

Orla and Fergal’s decision to volunteer with VBC was inspired by Orla’s late father, Pat Hughes.

“Dad was the kindest and most generous of people and always encouraged us to live life to the fullest and take care of those less fortunate,” Orla says. 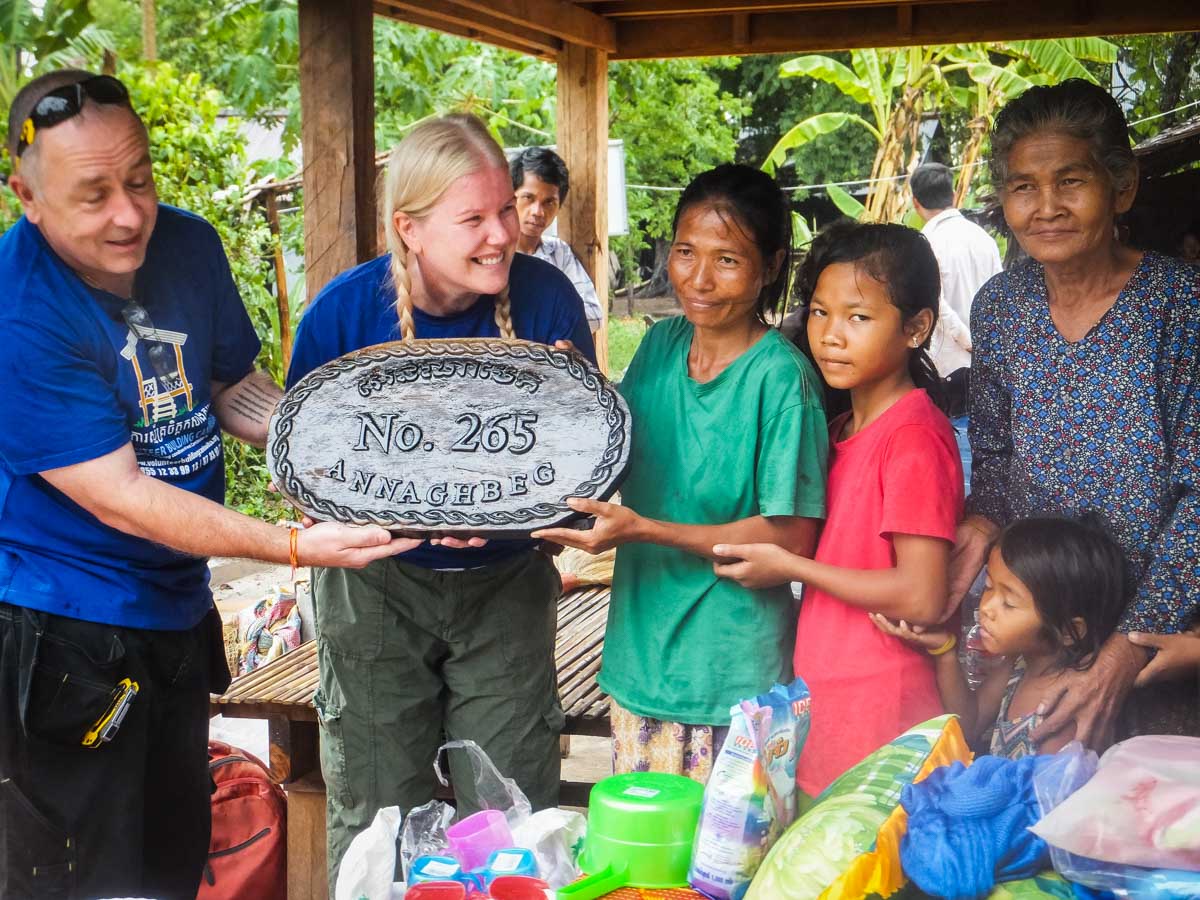 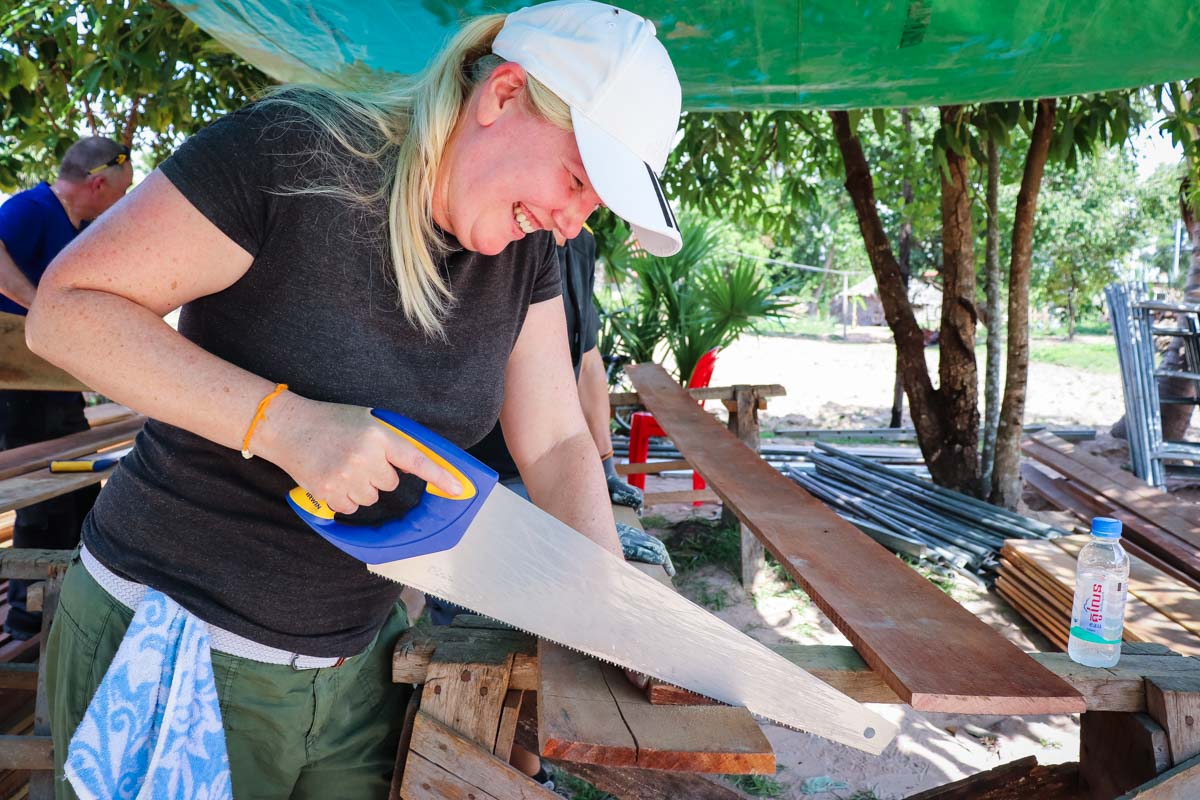 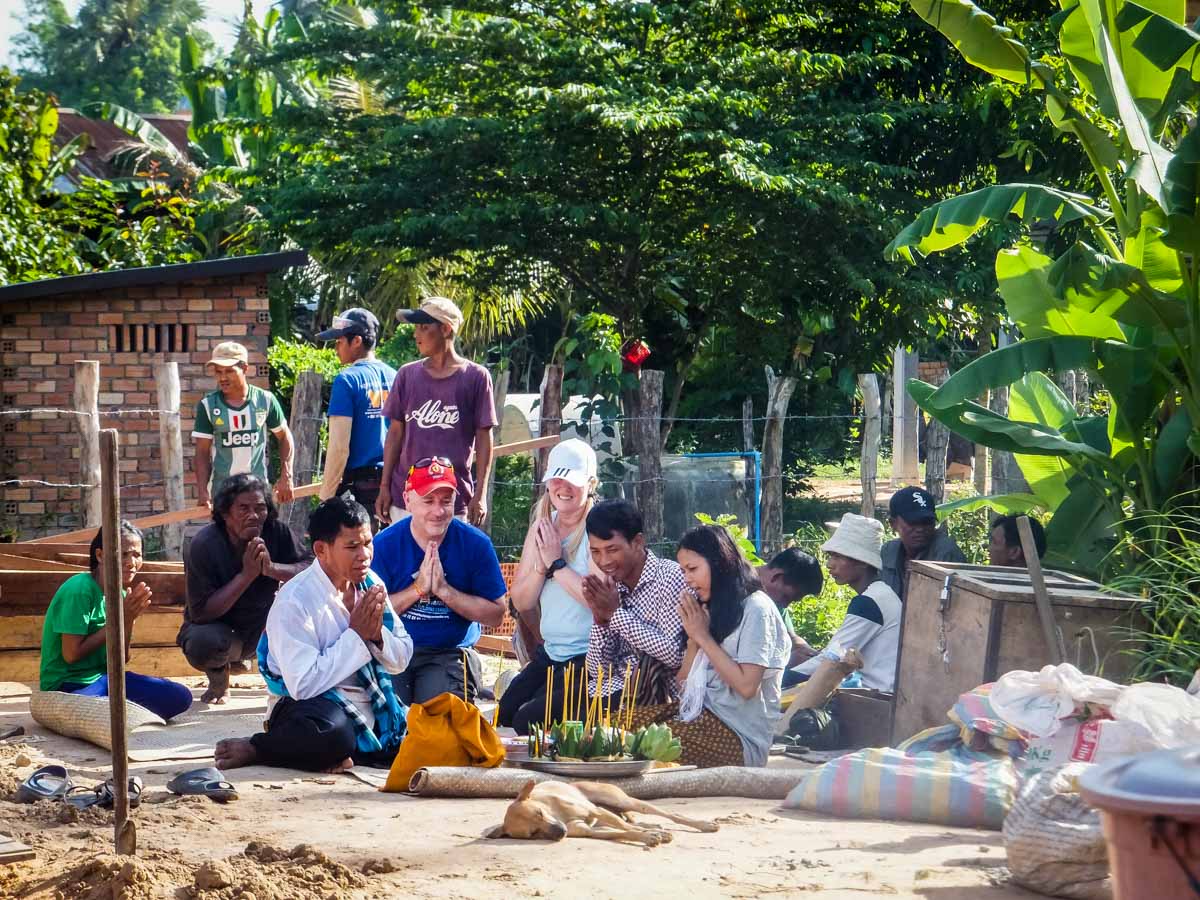 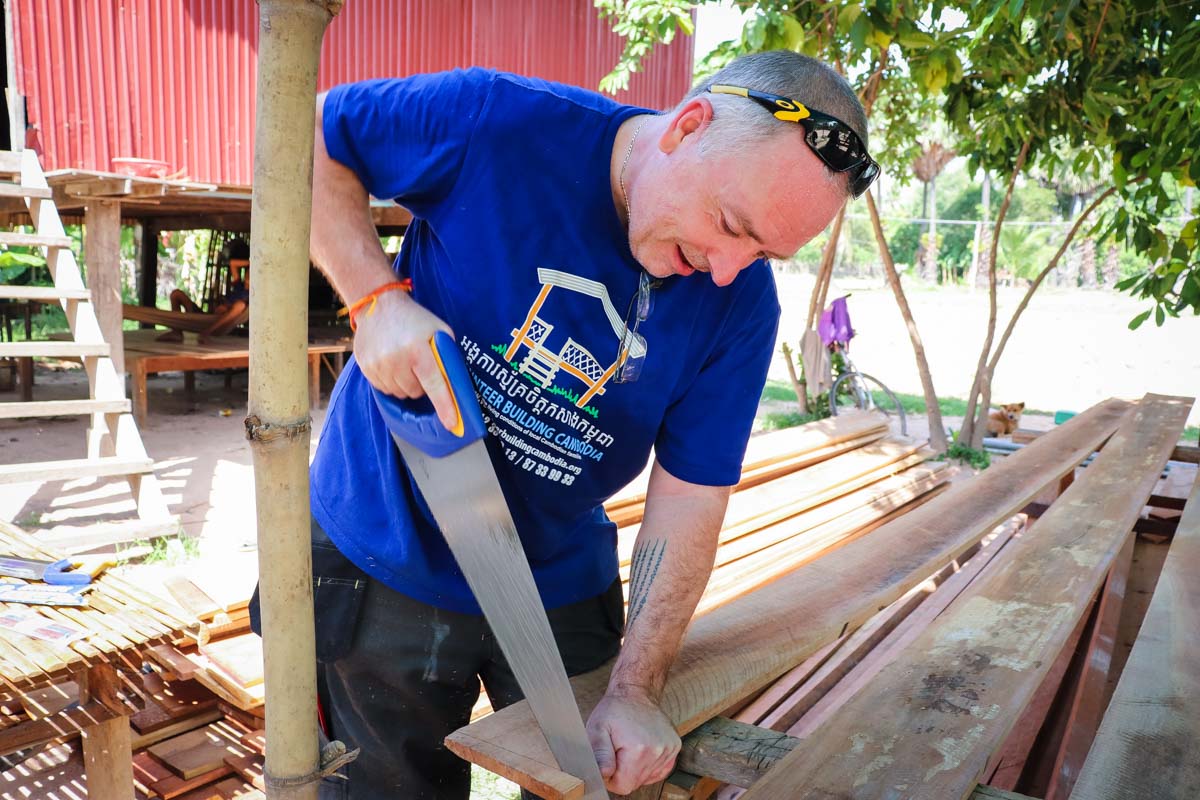 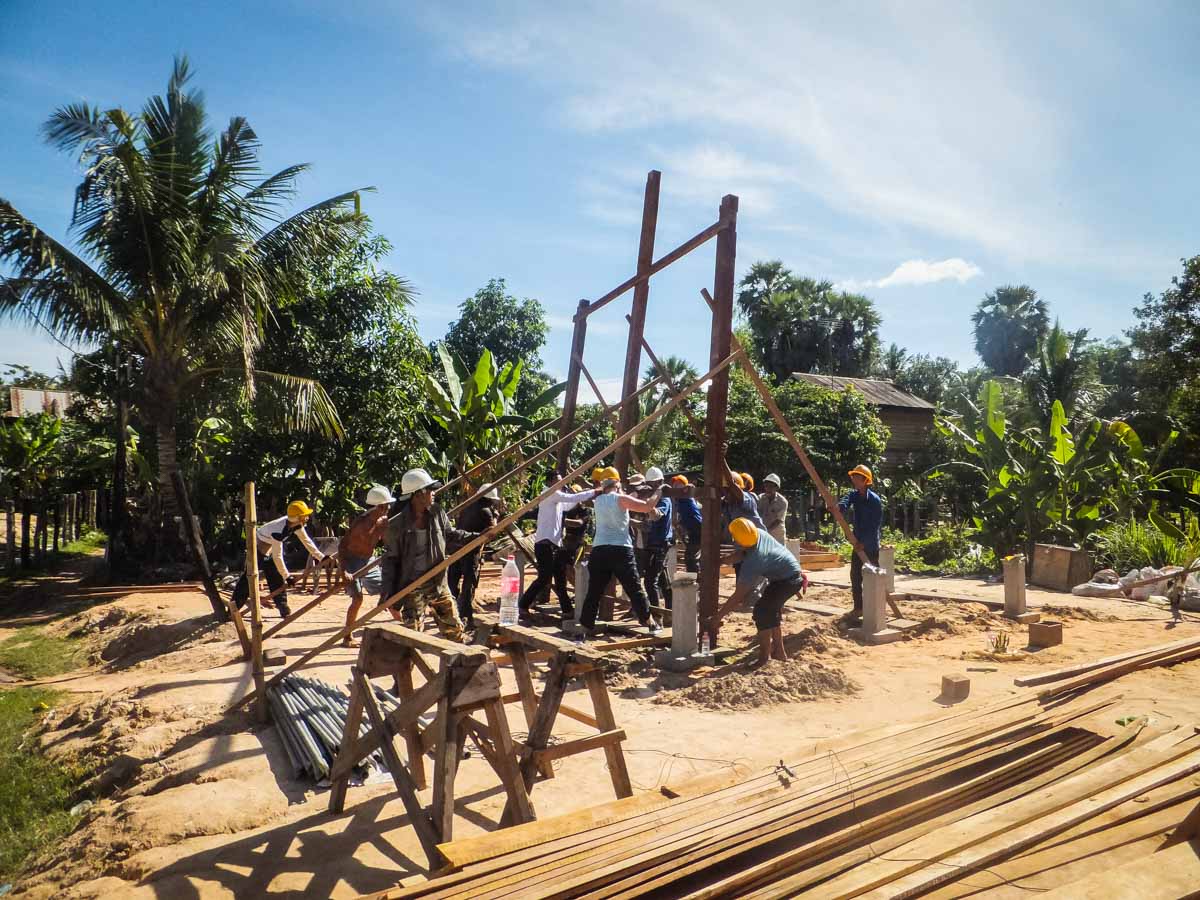 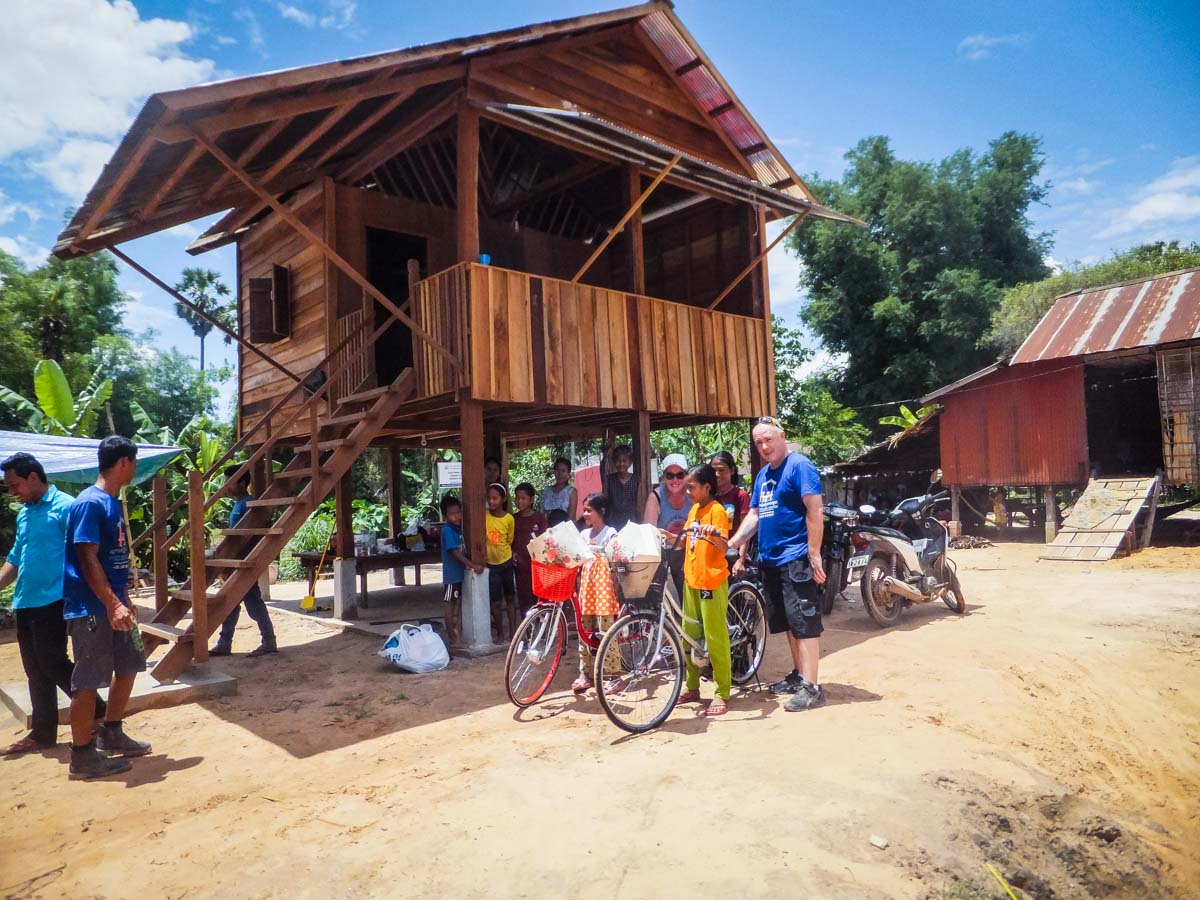 “He sadly passed away last year and that loss has been really hard but it has also been the driving force behind our decision to do this house build and help this beautiful family.”

The couple asked if they could dedicate the house to Pat, who was also a great friend of Fergal’s before the couple were married and his friend became his father-in-law. And they asked that the house be called Annaghbeg.

“He loved his home in the countryside in Annaghbeg in Ireland and we were reared on the premise of home is where the heart is,” Orla says.

“Choosing a house build as a volunteer was perfect. Feeling safe at home is what dad gave all of us and Fergal and I felt this volunteer project best reflected him.”

VBC’s builder, Thorn, is also a talented wood carver and he carved a beautiful plaque with the name Annaghbeg in Khmer and English and it has been hung on the wall of the house.

We mentioned this was a special build for many reasons and one of those reasons was Orla and Fergal’s desire to connect emotionally and spiritually with the family, their Buddhist traditions and Cambodia.

Because they were the only volunteers on the build, and the rest of the team was busy with two other house builds, we built this house over two weeks instead of the usual one-week time frame.

It gave them a chance to get to know the family better. This house was built for a widowed woman, with five children. The two youngest daughters, aged 11 and 12, lived with her. The oldest daughter was married and seven months pregnant and the second daughter was living with an uncle in Siem Reap. Her 15-year-old son had moved to Siem Reap and secured a job in town, while we were building the house. Prior to getting the job he came to the build site every day to help out.

The woman’s mother was also there and greeted Orla and Fergal with warmth and gratitude and a huge smile every day. She exuded love and kindness.

The house the family were living in was very fragile and could have blown down in a strong wind. It also leaked so the family got wet during the rainy season, which creates great discomfort, makes it hard for people to sleep at night and contributes to coughs, colds and other health issues.

This home will provide comfort and security for the family.

The couple were also interested in learning all about the Buddhist ceremonies and the traditions of rural Cambodians. Our social worker, Rorm helped explain what was taking place during the house blessing.

Because the construction of the house was paced over two weeks it was perfect for our newest builder, Boun, to lead a build for the first time.

Boun did a wonderful job and was incredibly thoughtful in ensuring Orla, who had never done any building or construction in the past, had enough things to keep busy while also feeling that she was actively involved in building.

She became very proficient with a hammer and got involved with the sawing and chiselling as well.

Boun was supported by Thorn, who dropped by to see how things were progressing and asked how he could help out. It was a wonderful example of teamwork between the builders and demonstrates the supportive environment Sinn is trying to create at VBC.

Orla and Fergal funded the house, a toilet and solar power for the family. In keeping with the family spirit to help those in need, Fergal’s 89-year-old mother funded a well, making it a complete make-over for this family.

“We have truly loved the experience and been humbled by the love and joy shown to us by Pao Pam, her children and especially her mum,” Orla says.

“VBC is a very special charity organisation that incorporates a wonderful balance of allowing you to be involved and connect emotionally, physically, spiritually, as well as financially, which is a rare combination.”

Designed By The Web & Design Studio